You can’t throw a gyoza in London these days without hitting an East Asian eatery, to my extreme delight. Gone are the days when you had to muscle past tourists in Chinatown to get your noodle on. Shoryu now occupies a valid place in this burgeoning field. On a frigid winter’s day I visited the Kingly Court branch of this small chain.

A gong resonated to my left as I entered a lively atmosphere. The gong marks anyone entering or exiting, meaning it sounds roughly every 20 seconds at lunchtime — a solemn tone balanced by laughter and dishes clattering. A chattering group of waitresses broke off conversation to greet me in Japanese, and I was shown to a stool by a wooden counter.

This ground-level branch has an open kitchen and attached dining room that extends past the counter seating to a second dining room. Having not yet been to Japan, I wondered whether the cafes there are as sexy and inviting as those in London – all blond wood and mood lighting. The boyfriend assures me they are not, at least in Tokyo, where he frequented flourescently bright, acoustically aggressive places focused solely on eating, ambience be damned. Lucky London, with our appreciation of zen dining.

Shoryu specialises in tonkotsu ramen from the Hakata district of Fukuoka, which didn’t strike me as wildly different from other ramens I’ve tasted except the noodles were straight, rather than curly.

They take 12 hours to fine-tune the signature opaque, pork-based broth and their diligence has earned a legion of fans, considering the attention on social media. Breaking with convention, I tried their “white natural” vegetarian version, made with tonyu soy milk, miso, konbu and shiitake broth, atsuage fried tofu, kikurage mushrooms, spring onion, menma bamboo shoots and nori seaweed. On that freezing February day, it had life-giving properties. 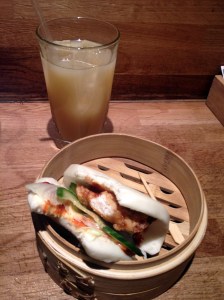 Pork buns are an obvious choice these days, so I went for the Shoryu chicken from bun options that also included tiger prawn tempura, halloumi-mushroom and Wagyu beef. Diehards would miss the pork, but I’m not a huge fan and the key ingredient was there: a light, spongey bun that came stamped with Shoryu’s logo. In it was nestled tangy soy-marinated chicken karaage (translation: deep fried). There’s a long list of other sides, including fishcakes, whitebait, onigiri and tofu.

The counter was a good choice for a lone diner and her laptop, but there’s a palpable air of conviviality in the restaurant. Maybe it was the warmth exuded through feng shui. Maybe it was the pervasive sound of the gong and cries of Japanese welcome. In any case, I suddenly wished I had brought a friend to share this experience.

I look forward to taking in an hour on Shoryu’s terrace this summer, but ultimately this is exotic winter comfort food, something you can never have too much of in England.